Archives For Art in the City 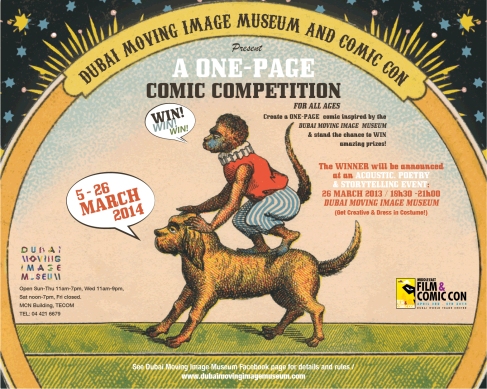 Dubai Moving Image Museum and the Middle East Film and Comic Con present a comic competition for all ages. Create a one-page A3 comic and stand the chance to WIN a 3-day pass to Comic Com 2014 (April 3rd-5th), get promoted by the museum and Comic Con and have your comic reviewed by MARVEL COMICS! Visit the museum at a special rate of AED25 and get your entry. The more you visit the more you can enter!

Deadline is 26 March 2014 and the winner will be chosen at an acoustic, poetry and storytelling event from 18h30-21h30. We encourage you to dress up in our comic theme, so get creative!

The best entry will win a single 3-day pass to The Middle East Film and Comic Con. The winning one-page comic will be reprinted (X10 original copies) to A3 size and displayed at the Dubai Moving Image museum (DMIM) stall at The Middle East Film and Comic Con (April 3rd-5th) 2014. Depending on the amount of prints sold, a 15% commission will go to the DMIM and the rest of the proceeds will go to the winning artist. If the artist wishes to donate the original piece, the artwork will be framed and displayed in the DMIM. The winning one-page comic will also receive a review and critique from the Vice President of Creator Content Development of Marvel Comics, CB Cebulski.

It was a great honour to have His Highness Sheikh Majid bin Mohammed bin Rashid al Maktoum, Chairman of the Dubai Culture and Arts Authority inaugurate the Dubai Moving Image Museum today

A full album of the event can be found on our facebook page www.facebook.com/DubaiMovingImageMuseum

Dubai, United Arab Emirates, 13 May 2013: Akram Miknas, Chairman of MCN Group, was today honoured with a revered Sheikh Mohammed bin Rashid Al Maktoum Patrons of the Arts Award in the second highest category – for his Moving Image Museum. Akram Miknas was personally presented with the award by HH Sheikh Maktoum bin Mohammed bin Rashid Al Maktoum, Deputy Ruler of Dubai, in recognition of his contribution to the Emirate’s artistic development.

“I am grateful to Dubai for being a great home for our museum and more so to the Sheikh Mohammed bin Rashid Al Maktoum Patrons of the Arts Awards for the recognition I have received. It motivates me to do even more for the museum and for the arts scene in this region,” said Akram Miknas, the founder and owner of the Moving Image Museum, and Chairman of MCN Group.

The Moving Image Museum is one of only a handful of museums in the world focusing on the history of the moving image, and is the only museum of its kind in the Middle East. Charting the evolution of the moving image, from the first primitive cave drawings to the birth of the motion picture film, the Moving Image Museum houses Akram Miknas’ private collection, painstakingly accumulated over more than 30 years. The Moving Image Museum was born out of his wish to share his collection with the public, hoping to inspire and educate the region with an exciting part of history. All items in the museum are original, dating back from the 1730s to the twentieth century.

The museum is located on the first floor of MCN’s Hive building, located in Tecom Section C in Dubai.